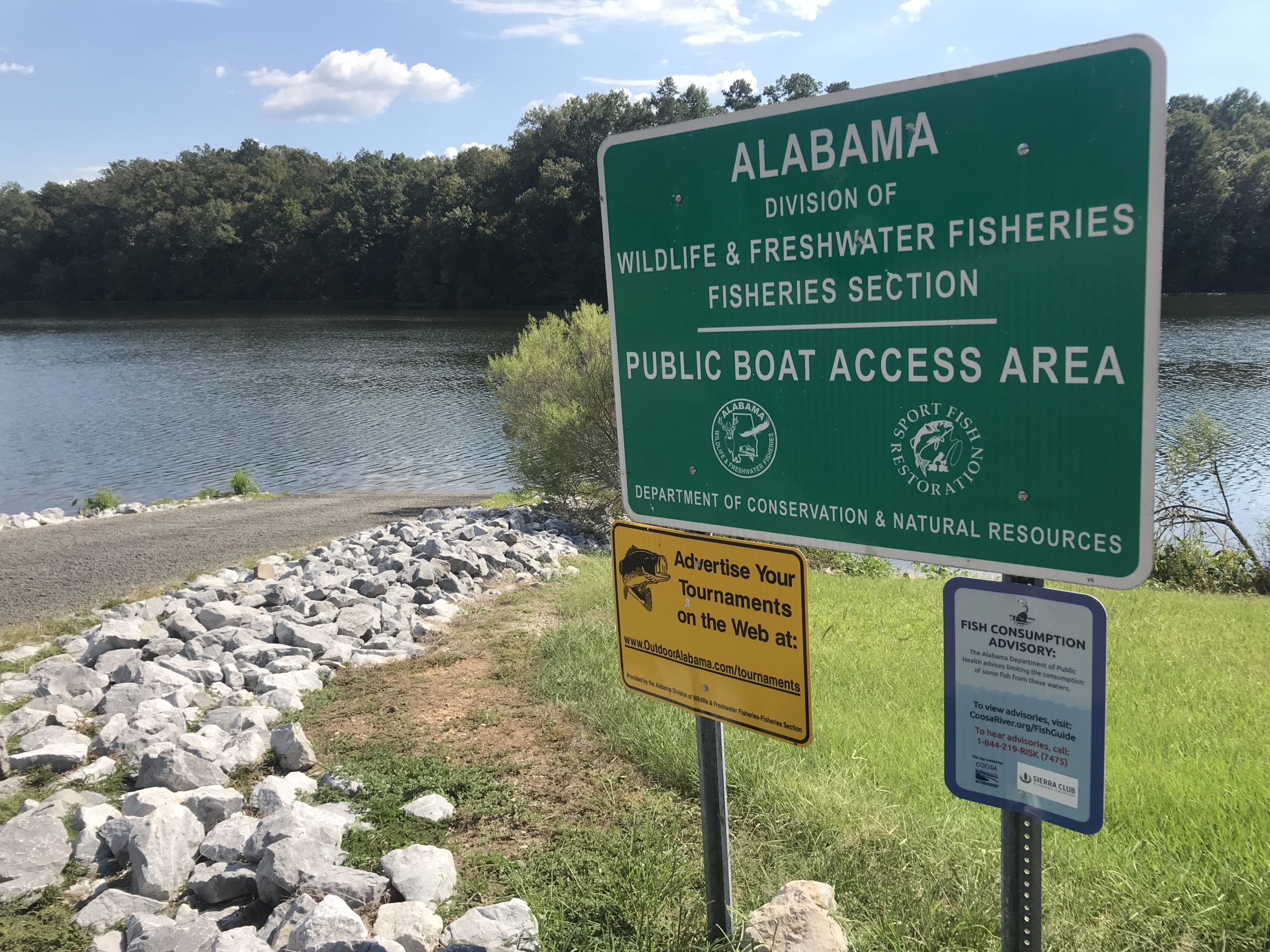 What’s the deal with these advisories?

Deep in the southeast, we’ve got some of the best fishing in the US. Based on the 2011 National Survey of Fishing, Hunting and Wildlife-Associated Recreation, 683,000 anglers casted a line in Alabama’s waterways. From the 60 miles of shoreline that Alabama shares with the Gulf of Mexico to the 177,000 miles of rivers and streams that flow through the state– there’s a fishing hole for anglers from all walks of life.

State governments have the primary responsibility for protecting their citizens from the risks associated with fishing in their local waterways— from eating contaminated fish to interacting with polluted water. In Alabama, the River State, fishing is more than just a past time, it’s a way of life. Fishermen should have the right to know what’s in their fish, and it starts with learning more about the advisories on the Coosa River and how they impact our health. 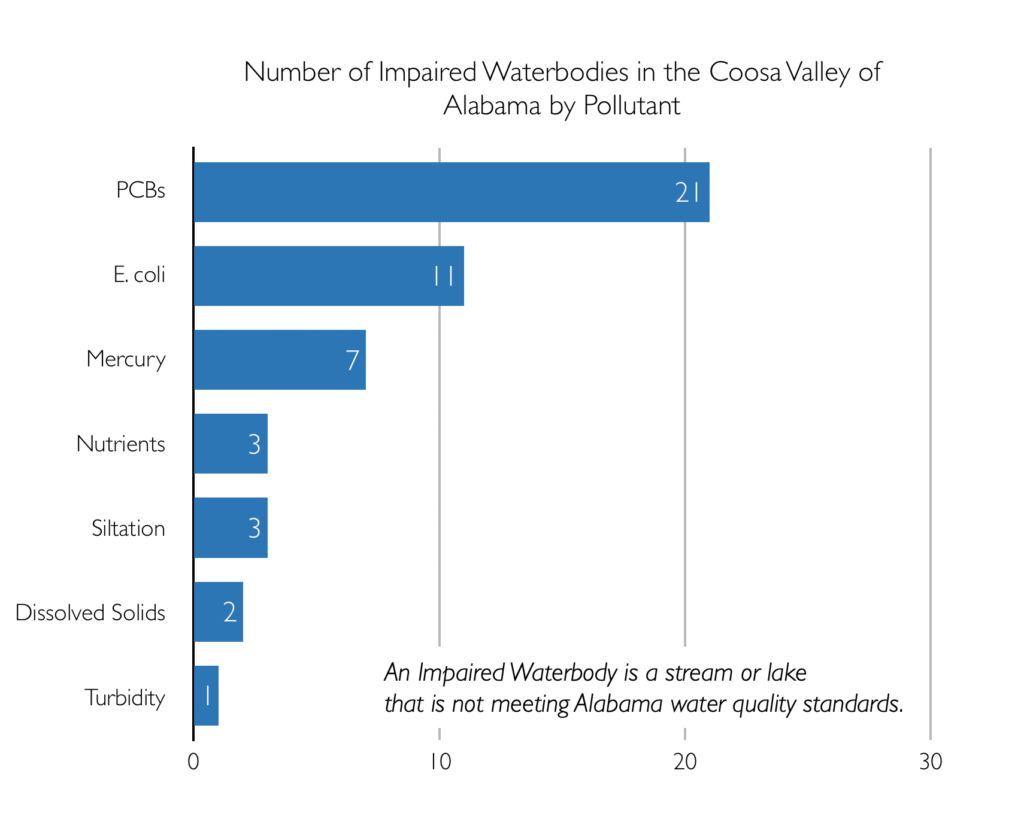 That’s why when the annual Fish Consumption Advisories are released by the Alabama Department of Public Health, we make it a priority to provide YOU with the resources you need to stay happy, healthy, and fishing for many years.

Scroll through the map to check out where the FISH Consumption Advisories are. Click on the icons to learn more 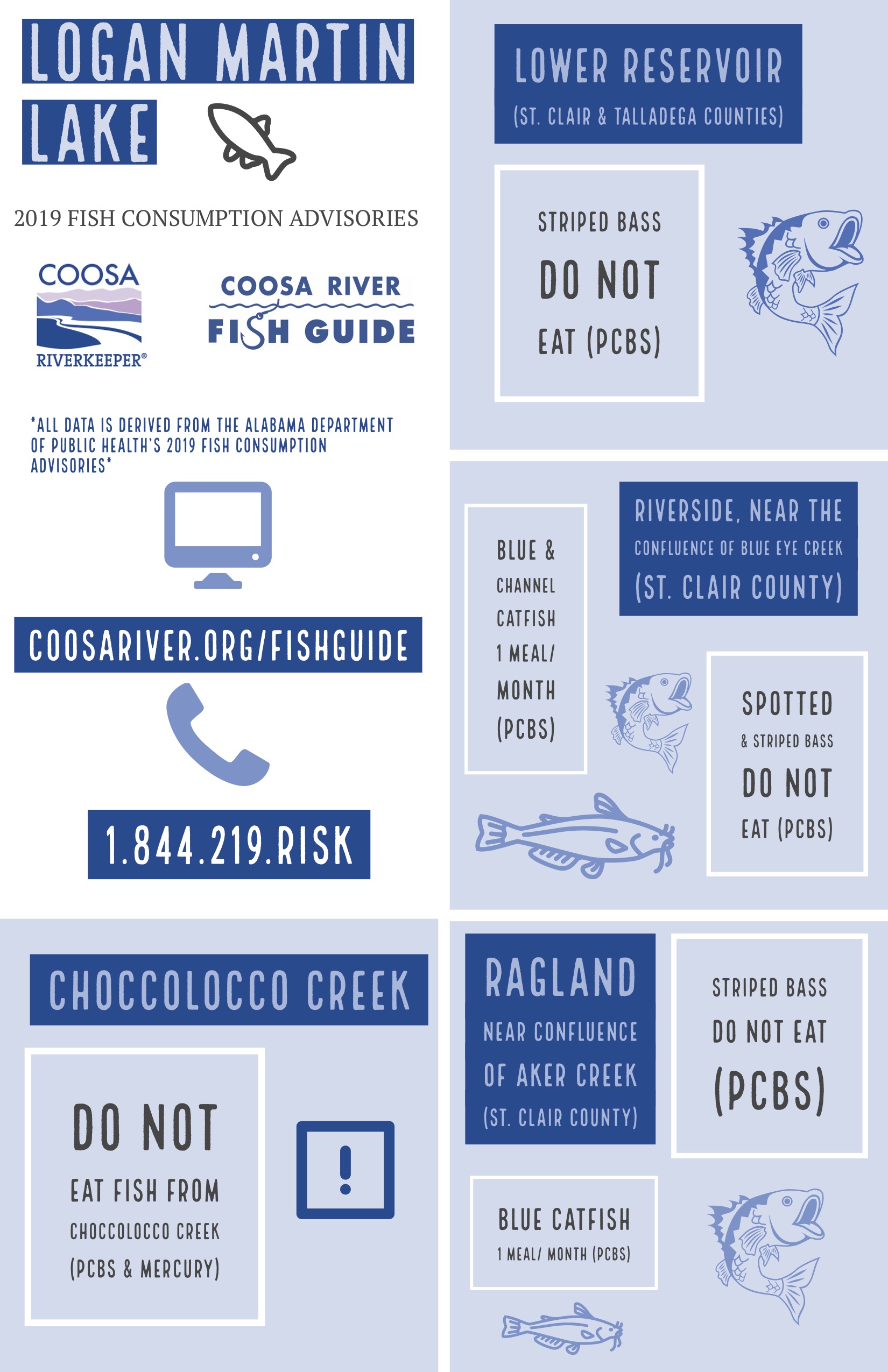 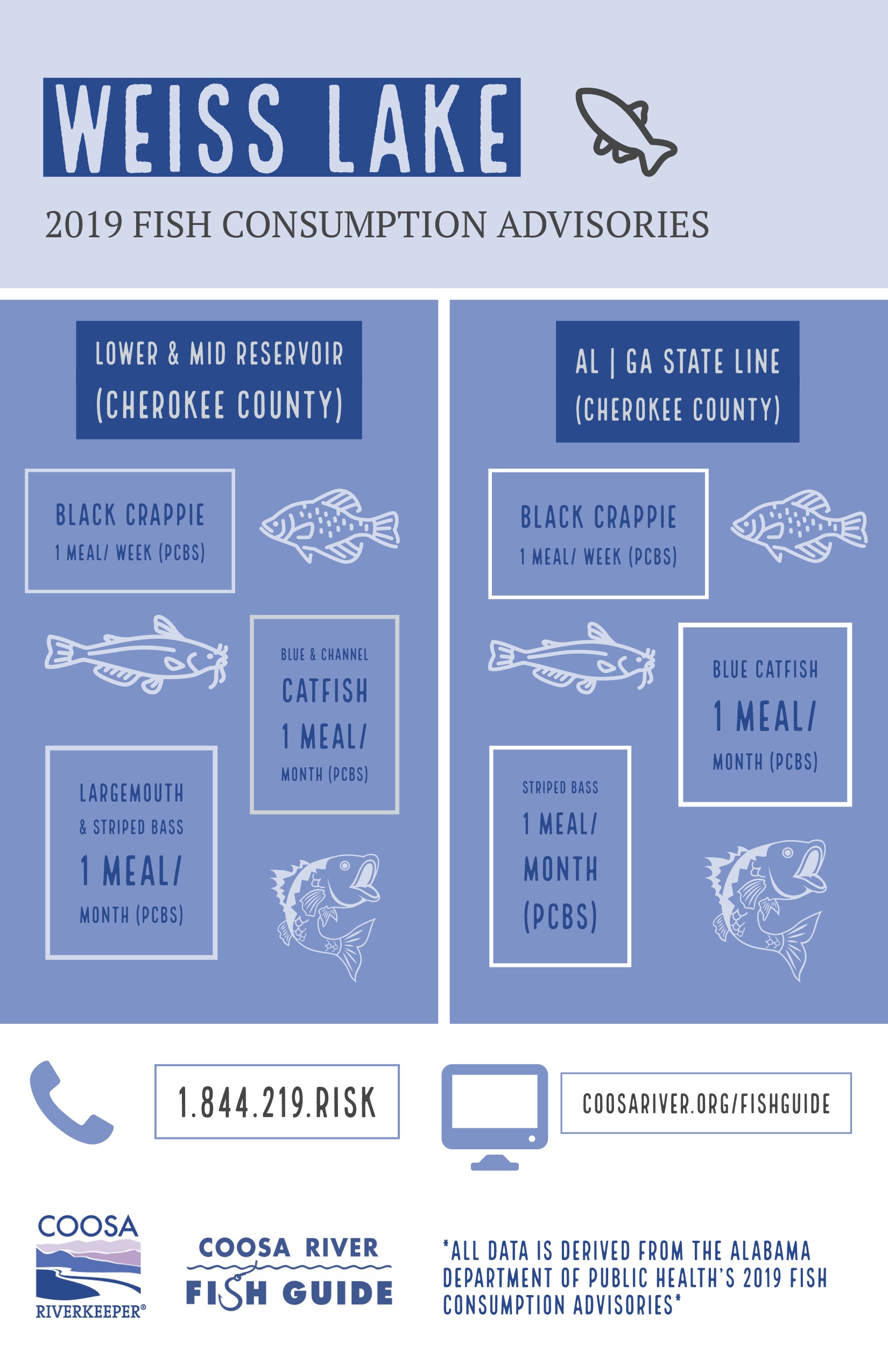 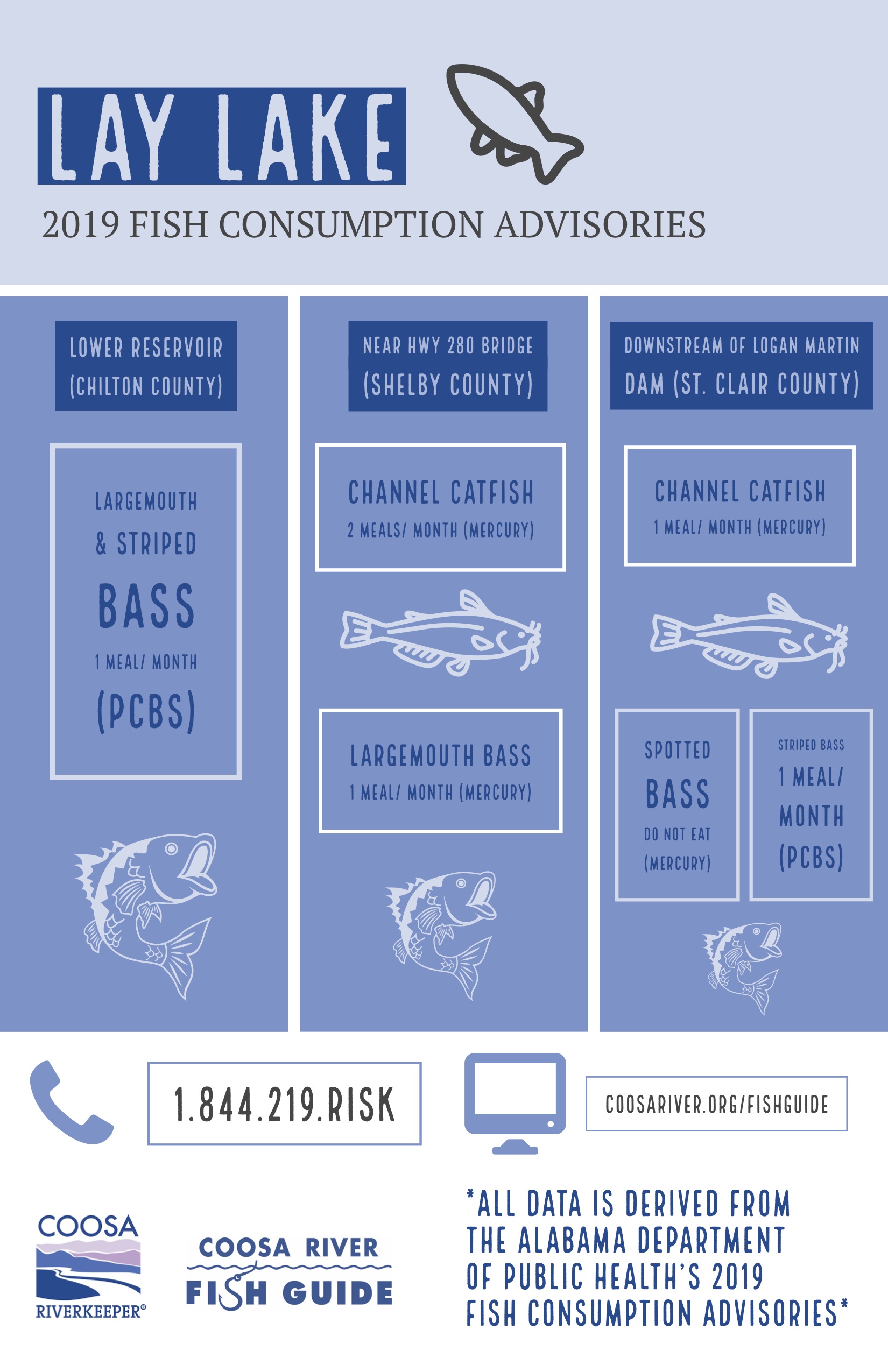 Okay, so what does these advisories mean for my health?

According to the Alabama Department of Public Health (ADPH) there are two toxins found in some of the fish on the Coosa.

The Coosa Valley is the first place in the world that PCBs were commercially manufactured, beginning in 1929 at Swann Chemical Company in Anniston. Look for a more in depth blog post on the history of the contaminant in the Coosa Valley.  The plant was located on a tributary to Choccolocco Creek. Choccolocco Creek currently has a “No Consumption” advisory for all species of fish. The advisory was first issued by ADPH in 1993.

Polychlorinated biphenyls (PCBs) accumulate in fatty tissue of fish and you can reduce your exposure depending on how you prepare your catch. According to the Alabama Department of Public Health, “high levels of PCBs have been linked to problems with learning and short-term memory.” PCBs accumulate in the sediment at the bottom of lakes and stream. PCBs can also accumulate in human breast milk.

It is a naturally-occurring chemical element found in the earth’s crust.

Microscopic organisms convert mercury into methyl-mercury, the most common organic mercury compound. It can also be released into the atmosphere by coal fired power plant emissions.

In 2008, the Environmental Integrity Project named the Gaston Steam Plant on Lay Lake the second highest emitter of methylmercury in the country!

The ADPH warns that “once in the environment, mercury is converted to methyl-mercury, which is the chemical form that is most hazardous to human health.” Mercury accumulates in the fish tissue and you can only reduce your exposure by following the advisories. When mercury accumulates in the body it can cause damage to the nervous system and kidneys. For women of childbearing age, there is also a risk of causing developmental and/or learning problems in their children.

To learn more about fishing on the Coosa….

Fishing Basics 101: How to Choose a Lure

Casual fishing basics discussion between me, a fishing novice, and Tyler, our Fish and Swim Guide Specialist. He also happens to fish on the Montevallo Bass Fishing Team and runs an awesome jig company! Check out his site Wicked Jigs. If you missed our first...