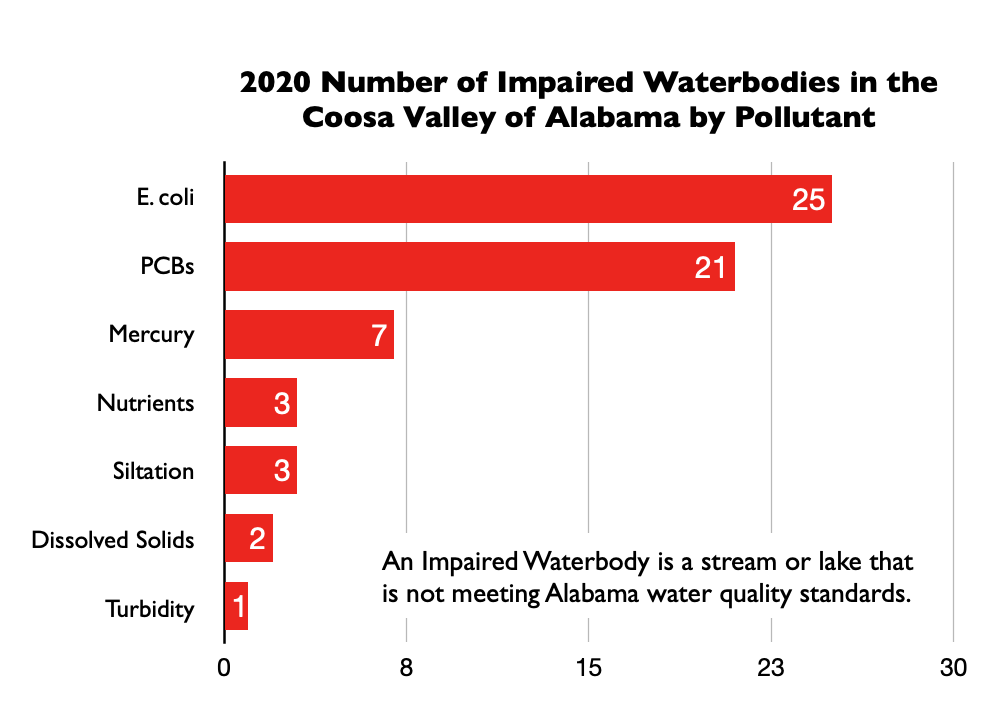 see the 2020 Impaired Waterways in Alabama

The State of Alabama has given every stream in our borders a “designated use.” These are government-defined views on what our streams should and can be used for, and don’t necessarily correspond with how they are used by the public. Uses include Public Water Supply, Swimming (or other whole-body contact), and Fish and Wildlife. But often, excessive pollution will harm a stream to the point where it’s not safe to use it in the way designated by the state. In those situations it is considered “impaired for its intended use” and added to the List of Impaired Waters.

The List of Impaired Waters, known to regulators as the “303(d) list” for the section of the Clean Water Act which establishes it, names all the stretches of river in the state which there is data showing that the stream is not meeting its designated use.

What We Do About It

When a waterway is put on the List of Impaired Water, a study must be performed which will lead to potential regulations to limit further contamination using what is known as a Total Maximum Daily Load (TMDL), or, the total amount of pollution that can be put into that waterbody every day and it meet state water quality criteria. Think of a TMDL like a pollution budget for a specific waterbody.

Once a stream that is listed as impaired is meeting its water quality criteria again, it can be removed from the List of Impaired Waters. Coosa Riverkeeper’s water quality monitoring projects are designed to test locations at an appropriate frequency to determine impairments. We submit our data to the state in advance of the preparation of each List of Impaired Waters and through the Triennial Review. Our data has shown E. coli impairments for several segments of river that have since been classified as impaired. We are grateful that our monitoring data can be used to educate the public about water quality and provide crucial data to our state agencies.

In 2012, the Alabama Department of Environmental Management arbitrarily and capriciously attempted to delist to the Coosa River from the List of Impaired Waters for PCBs. Coosa Riverkeeper filed comments and also contacted the U.S. EPA. The EPA concurred with Coosa Riverkeeper and supported our comment by filing a similar one to ADEM, which had to reverse their decision in a major win for the Coosa River. ADEM again tried this in 2018 and Coosa Riverkeeper again successfully blocked the maneuver.