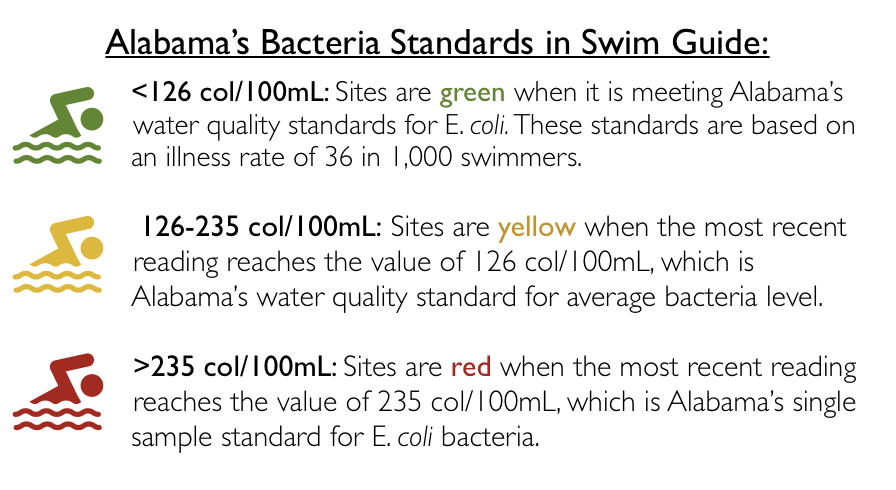 Is It Safe to Swim?

Is it safe to swim?

This was the most common question we received at Coosa Riverkeeper in our first four years, and one that an answer wasn’t readily available for. No one was regularly testing popular swimming areas to make sure it was safe to swim. So, we decided to do that ourselves, and thus, our Swim Guide program was born. With Swim Guide, now in its fourth year, you can see water quality results at popular swimming areas every week in the summer. The program is funded by private grants, donations from our members, and our Swim Club.

Water quality testing is sophisticated. But, we try to make it very simple for the average user to understand this complex data with a simple green, yellow, and red color coding system. Does red mean you will absolutely get sick? No. Does green mean you absolutely will not get sick? Also no. In this post, we want to explain what those colors really mean.

The Science Behind the Colors

What does a YELLOW swimmer mean?

At 126 col/100mL, we change a site’s color to yellow and describe it as having “moderately high E. coli.” This level, is Alabama’s average E. coli standard. If a waterbody has a level of E. coli that is greater than this, on average, it is considered “impaired,” or, essentially, unsafe for swimming.

What does a RED swimmer mean?

Predicting whether or not someone will get sick is not as easy as a color coded system. Some people can still get sick at levels which are “green” and the majority of healthy people won’t get sick at a level which is “yellow.” So while the color coding system helps to quickly interpret the results, there’s always a risk and you should ALWAYS take precautions to swim safely.

How to Swim Safe

There are three really simple things that will bring your risk of contracting a recreational water illness way down: