How to Use Temp Track to Catch Bass

Chuck Graham just won $10,000 at the Alabama Bass Trail Lay Lake stop. Chuck helped us develop the Temp Track program, where dozens of volunteer monitors report water temperatures during the peak fishing season. He uses Temp Track himself to stay in tune with the spring rise in water temperatures that triggers game fish into spawning. By knowing what water temperatures are in different parts of the lake, he knows where to find the biggest bass. He used his acceptance speech to give a shoutout to Coosa Riverkeeper while wearing one of our fresh hats which you can buy too here.

What follows is a write up from Chuck about how he uses temperature data to influence his fishing – well, at least as much of his winning secrets that he’s willing to share… 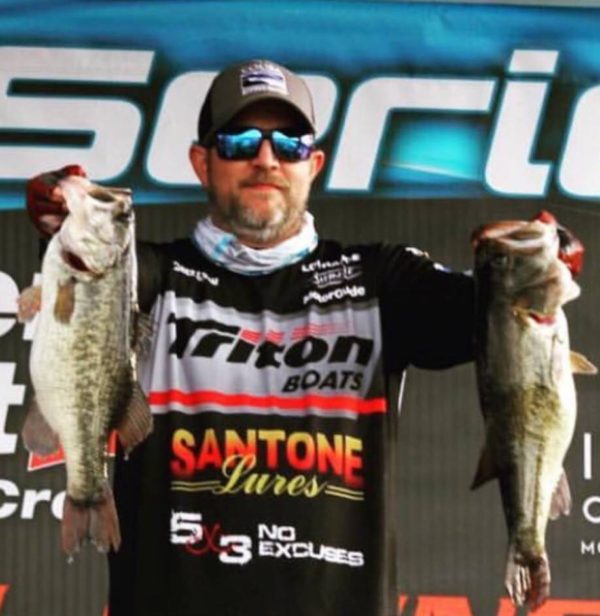 Whether you are a seasoned bass angler or just starting out, it’s important to understand the pre-spawn and spawn behavior of bass in Alabama.  My grandmother always said to start fishing for bedding bass when the dogwoods start to bloom.  I have fished for many years, and I can tell you that this logic is VERY SOUND…However, there is still fantastic fishing on the Coosa River prior to the dogwoods blooming.  This can be the most exciting time to fish.  Having a good understanding of when and why the fish are moving shallow can assist in catching your limit.  Typically, the pre-spawn bass can be the easiest to catch as they are preparing to spawn (lay eggs) in the shallow water.  The “river” characteristics of the lakes that make up the Coosa River lends itself to anglers because it can be easier to identify these areas over the traditional large impoundment lakes such as Lake Martin.

Typically, the magic water temperature for Coosa River fisherman to start determining the pre-spawn and spawn pattern for largemouth bass is 45 degrees. There are many factors that impact the water temps across the different parts of the river including current, rain, and whether it was a warm or cold winter.  It is not uncommon for these factors to cause the water to be above 45 on any given day and back down to 42 the following day.   However, it’s safe to say that when the water stops dipping below 45 degrees after December, the first wave of Coosa River bass are gradually entering into the “pre-spawn” pattern.   As the temperature rises, more and more bass start the migration to the pre-spawn locations.  Simply put, the bass are getting closer to the areas where they spawn and are feeding as much as possible to prepare for the stressful act of spawning (laying eggs).

To find the pre-spawn areas that hold the feeding fish, you must start by identifying the spawning areas where they will end up.  In other words, begin with the end in mind. Bass generally spawn in shallow water and in most cases, the average water depth of 2 feet is ideal for a bass spawn. Typically, the back of pockets and creeks offer many shallow areas for bass to spawn.   In addition, large flats located in some of the larger creeks and cuts also allow for prime places for bass to spawn. In particular, the famous Coosa River spotted bass like the large shallow flats more than the back of creeks.

Once these spawning areas are identified, it is easier to locate the pre-spawn areas. Identify areas leading into the flats increases the chances of catching these fish. Creek arms and points that hold structure such as wood and grass that the fish use as ambush points for baitfish are key. The abundance of grass on the Coosa River makes more than plenty of opportunity for these fish to stage before moving to the shallower spawning areas. Logic would tell you that as the water warms these fish will get closer and closer to the spawning areas. Many fishermen will start at the mouths of creeks early in the pre-spawn and work their way back to the flats until they run into staging fish. Typically, this can give you clues to where fish are set up in other creeks and cuts.  Near the end of the pre-spawn period when the water is anywhere between 50 and 60 degrees, anglers will sometimes start at the shallows and flats and work their way back out to the mouths of the creeks and cuts with the same goal of bumping into these fish. The distance in which these bass are willing to travel can depend on the bass, but can also depend on the size of the creek or cut. In smaller creeks and cuts, the fish may not travel very far from deep water winter haunts up to the shallow to spawn, but logic would also tell you that the smaller the creek and cut, the fewer the fish.

The actual spawn is said to start around 65 degrees. However, on the Coosa River it is safe to start looking for that first wave of spawning bass to set up in the shallows and preparing to spawn around the 60 degree mark. Typically, there are multiple waves of fish on the Coosa River that follow this same migration…and of course, there are MANY other variable such as cold fronts, rain and moon cycles that impact which fish start this migration and which phase they may group themselves.  Many anglers believe that the first phase of migrating pre-spawn bass often hold the large trophy fish that are caught on the Coosa River. During late February and most of March it is not uncommon to catch and find fish during all three phases: spawn, pre-spawn and post-spawn.

There are countless variables as it relates to catching fish during this time. In addition to all the variables discussed above, the choice of baits and the differences between the spotted bass and largemouth bass could be discussed in great detail. However, as any seasoned angler would tell you: don’t overthink the variables. Get in an area that fits the description of the spawn stages and START FISHING.