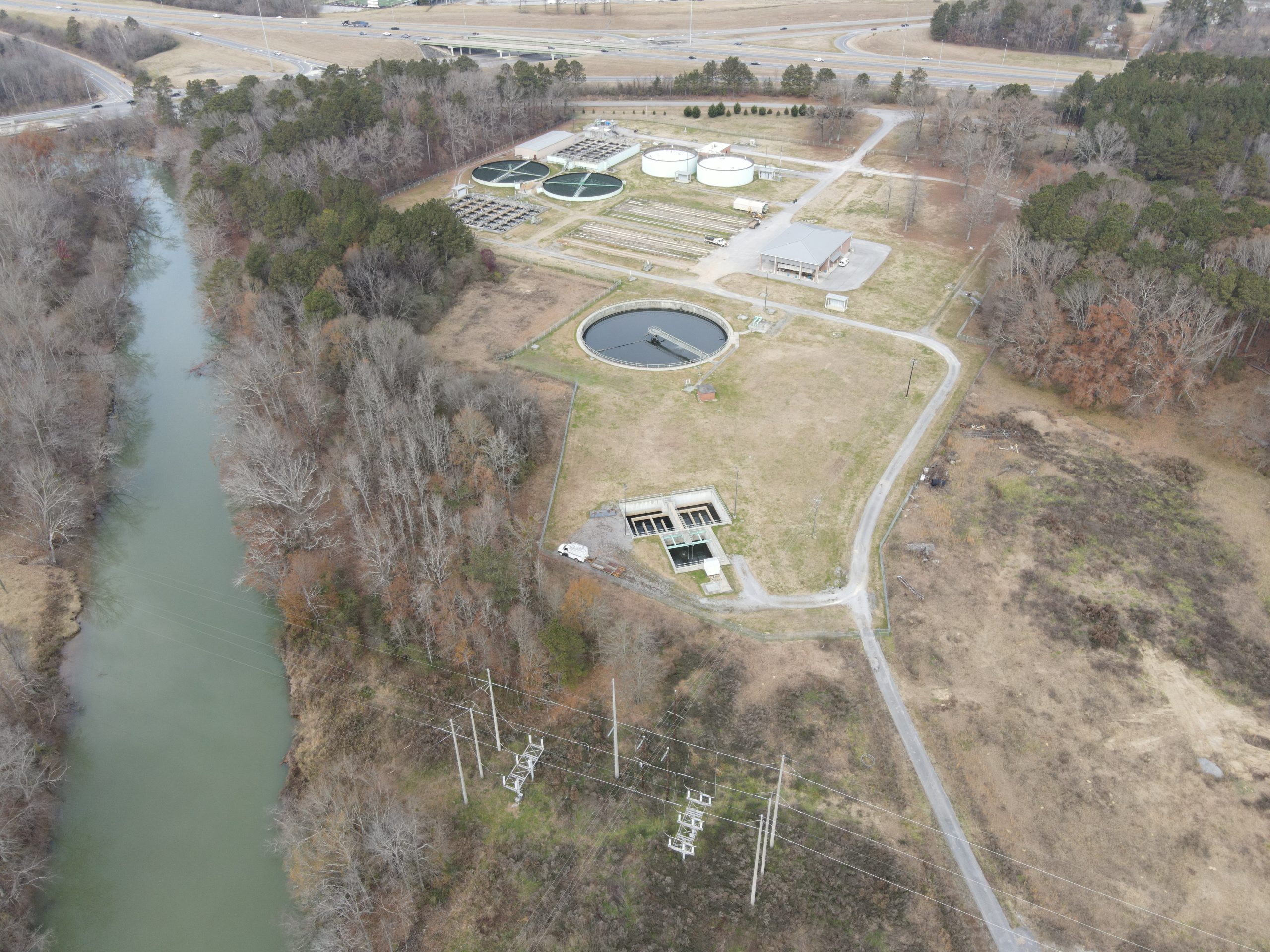 Gadsden, AL- Conservation and community groups sued the Water Works and Sewer Board of the city of Gadsden, Alabama today for neglecting its duty to maintain public sewers and not properly reporting on sewage pollution that it discharges, in violation of the Clean Water Act.

The city’s failure to properly maintain its system has resulted in cracked sewer pipes, leaking manholes, blockages and pump-station failures imperiling public health and the environment. The sewer board has allowed public sewers to deteriorate to the point that sewage regularly overflows into homes and local waterways, according to the lawsuit.

“We live here. We’re the ones affected by the toxic sewage overflow,” said Carolyn Parker, a Gadsden resident. “Today’s filing shows that we Gadsden residents are determined to remain part of any solution to the sewage problems that our board has caused.”

Today’s lawsuit seeks to correct these violations and other sewer system and reporting defects that have allowed more than 150 illegal sewer overflows to occur in just the past five years. The chronic sewage overflows cause portions of the Coosa River, Big Wills Creek and Black Creek to fail Alabama water-quality standards.

“The fact Gadsden’s leaders were recruiting a rendering plant to locate at its airport that would discharge thousands of gallons into an already broken system shows the systemic failure of Gadsden leadership to prioritize basic sewer services for its residents,” said Christie Knowles for Advance Etowah. “This Clean Water Act lawsuit seeks to require Gadsden’s leaders to address chronic sewage problems that disproportionately affect residents of low-income communities who have been seeking protection against these problems for years, to no avail.”

Last November the groups filed a notice of intent to file a citizen suit against the city’s sewer board for the ongoing violations of the Clean Water Act. In response to the notice, the state of Alabama brought a civil enforcement action against the sewer board in the Circuit Court of Etowah County, Alabama. But the state’s action does not address all of the violations included in the groups’ notice letter, prompting the groups to file today’s federal lawsuit to address the multiple violations of the federal Clean Water Act.

Before the state responded to the groups’ notice of intent to sue, it had not taken any enforcement action on the matter despite, for years, receiving reports from the sewer board detailing hundreds of illegal discharges into the Coosa River as well as sewage pipe leaks and overflows and water-quality violations.

“Families who live, work and play in Gadsden and on the Coosa River deserve better,” said Justinn Overton, the Coosa Riverkeeper. “The frequency and volume of sanitary sewer overflows harm water quality and public health throughout the city. ADEM’s failure to enforce permits has left us with no choice but to go to court.”

Many waterways in the Gadsden area have chronically high levels of pathogens like E. coli, leading to significant water-quality problems that harm aquatic species, human health and the health of wildlife that depend on the Coosa River. Coosa Riverkeeper’s water-quality program, Swim Guide, collects data in many of these areas and makes that information available to the public.

“We’re going to court to ensure that city and state officials stop allowing raw sewage releases that can harm the health of residents and the amazing plants and animals that live in the Coosa River watershed,” said Hannah Connor, an attorney at the Center for Biological Diversity. “For too long, Gadsden has cut corners and looked the other way as the problems have mounted. Enough is enough.”

Coosa Riverkeeper has received multiple complaints from community members in Etowah County over the past year including overflowing manholes and bad odors. The overflows disproportionately affect low-income communities and communities of color, according to maps prepared using the EPA’s Environmental Justice Screening and Mapping Tool.

“Children, seniors and people with decreased immunity are especially vulnerable to health problems that can be caused by sewage pollution,” said Annie Beaman, director of advocacy and outreach for Our Children’s Earth. “As with so many other issues, this kind of pollution impacts underserved communities the most. There is no excuse for it.”

The Coosa River has a wealth of biodiversity that is put at risk by these unlawful discharges: It is habitat for numerous Endangered Species Act protected freshwater mussel species, including the finelined pocketbook, ovate clubshell, southern clubshell, southern pigtoe and triangular kidneyshell, as well as other sensitive plants and animals.

It was also formerly home to the upland combshell mussel, which was declared extinct by the U.S. Fish and Wildlife Service earlier this year. The nonprofit American Rivers has previously rated the Coosa as the 10th most endangered river in the United States.

Despite existing sewage capacity and treatment issues, in 2020 the city of Gadsden agreed to accept hundreds of thousands of gallons of additional wastewater a day from a proposed Pilgrim’s Pride chicken-parts rendering plant. That agreement was suspended earlier this year, and Pilgrim’s Pride officially withdrew its application on Dec. 31, 2021.

Today’s lawsuit was filed in the U.S. District Court for the Northern District of Alabama by Coosa Riverkeeper, the Center for Biological Diversity, Advanced Etowah and Our Children’s Earth Foundation. 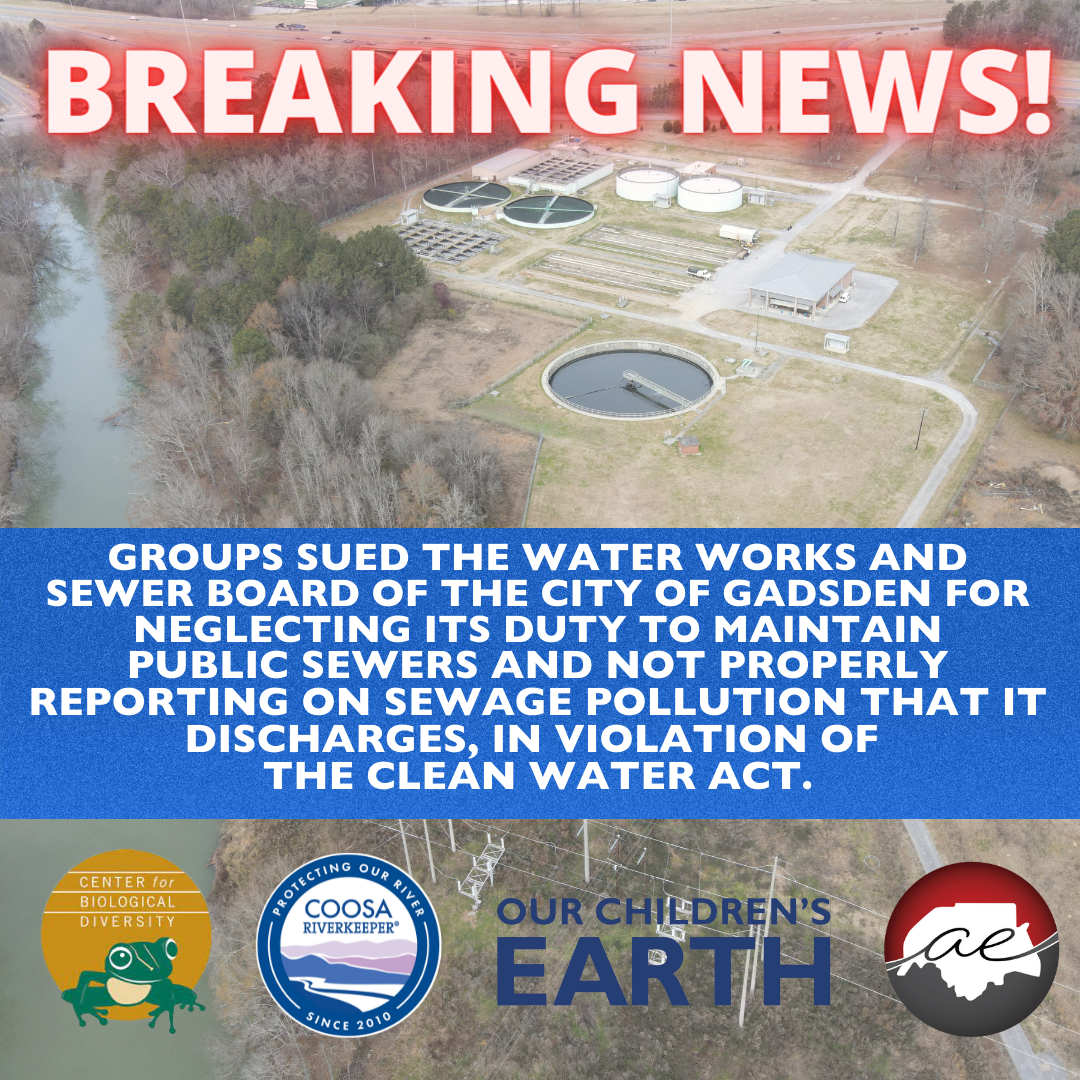 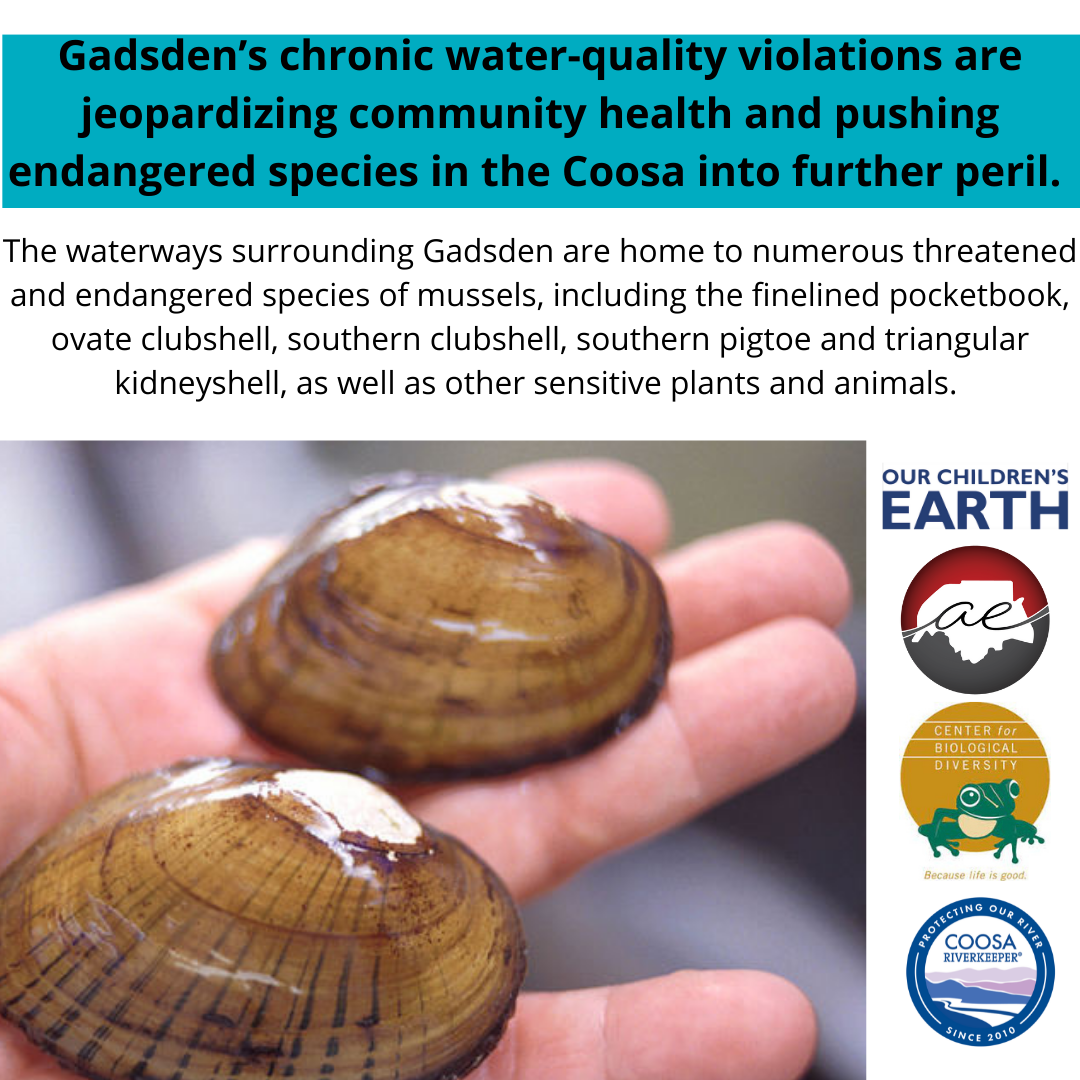 MEET THE PARTNERS IN THIS FIGHT 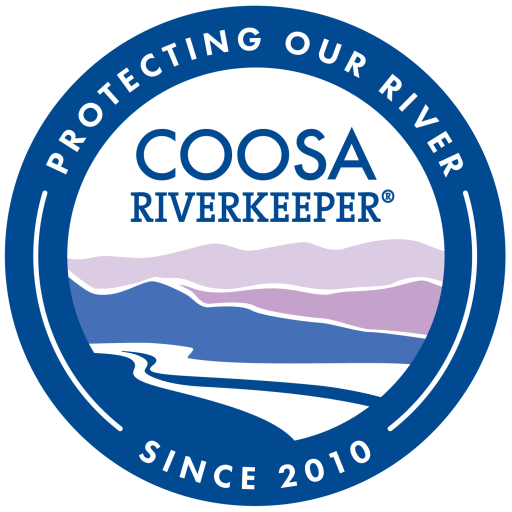 Coosa Riverkeeper is a citizen-based river conservation nonprofit organization whose mission is to protect, restore and promote the Coosa River and its tributaries in Alabama. We patrol the waters, educate the public, and advocate for the river. Learn more about our work by visiting CoosaRiver.org. 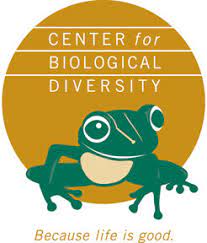 The Center for Biological Diversity is a national, nonprofit conservation organization with more than 1.7 million members and online activists dedicated to the protection of endangered species and wild places. Learn more at BiologicalDiversity.org.

Our Children’s Earth Foundation advocates on behalf of children, who are most vulnerable to pollution, to enable them to breathe clean air and use clean water. Learn more about their work at OCEFoundation.org. 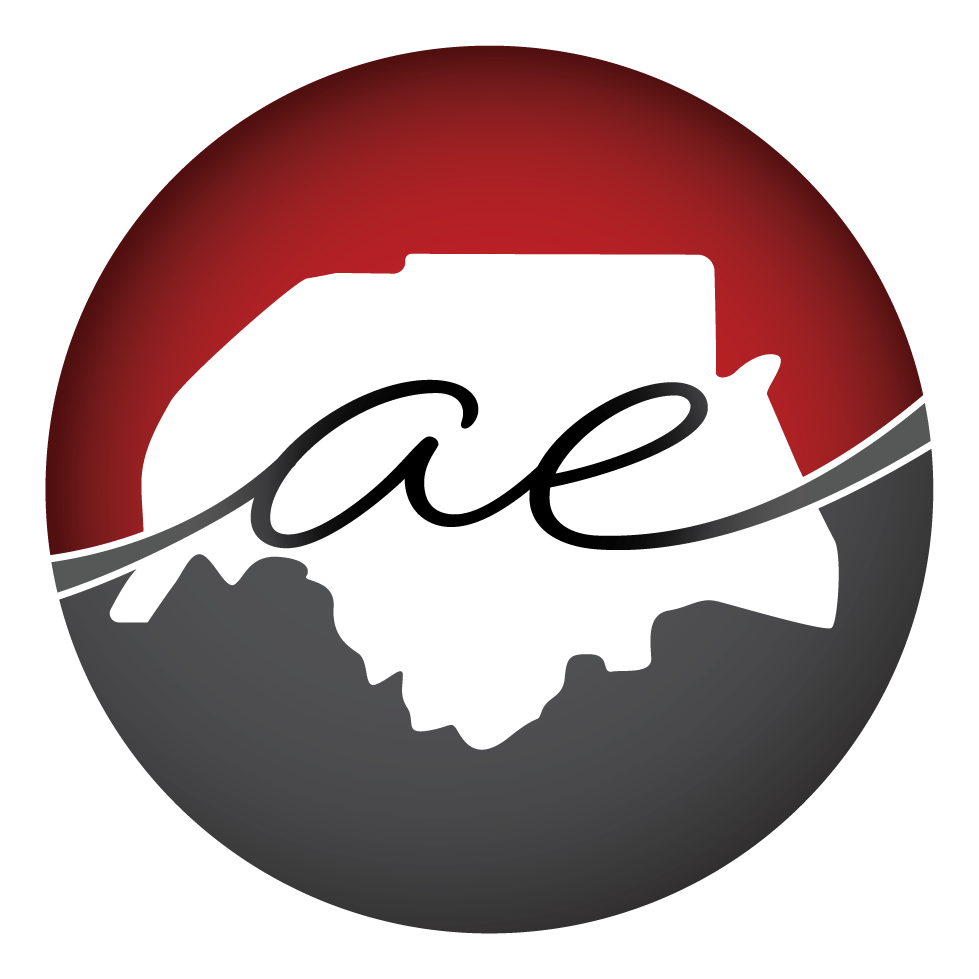 Advance Etowah is working for the citizens of Etowah County for a better future. Learn more about their work at AdvanceEtowah.org.