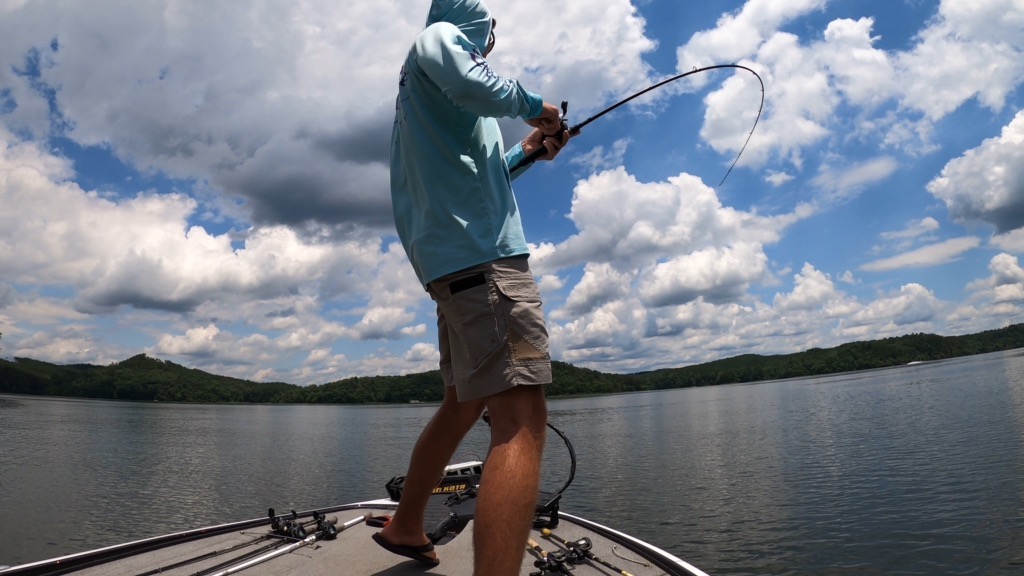 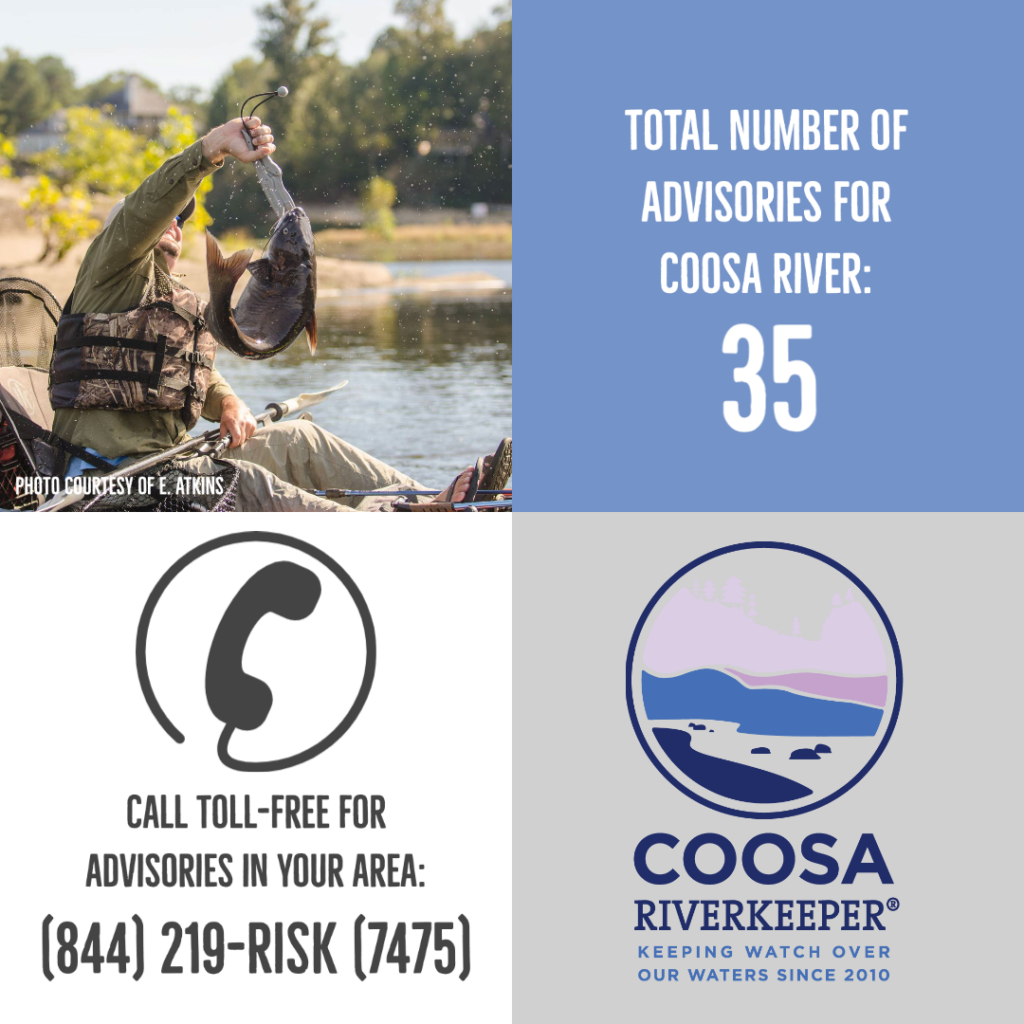 Of the 213 advisories issued across 98 waterbodies in Alabama, 35 of these consumption advisories were listed on the Coosa River and its lakes. 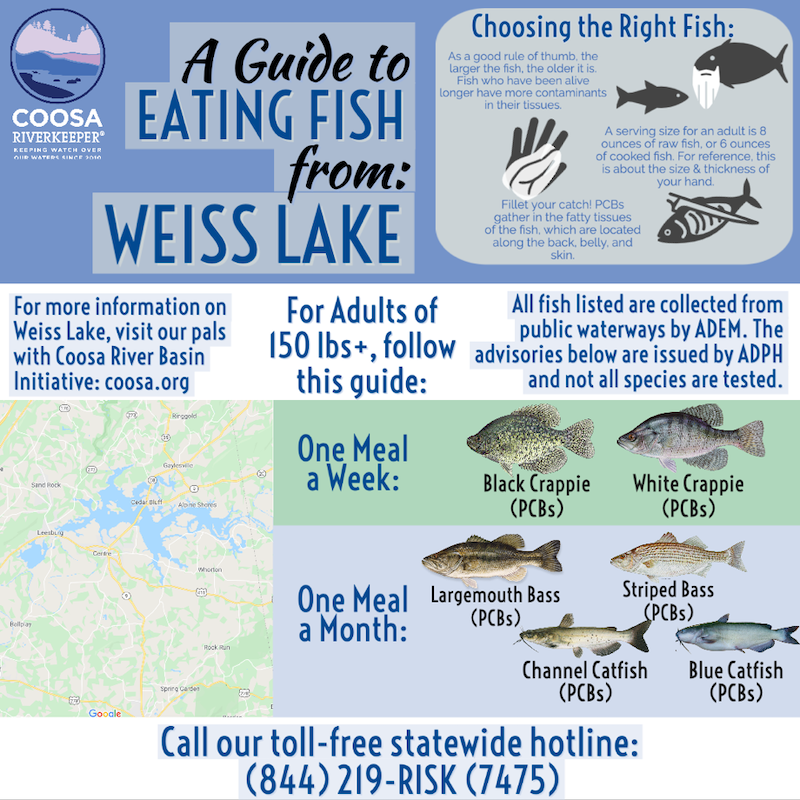 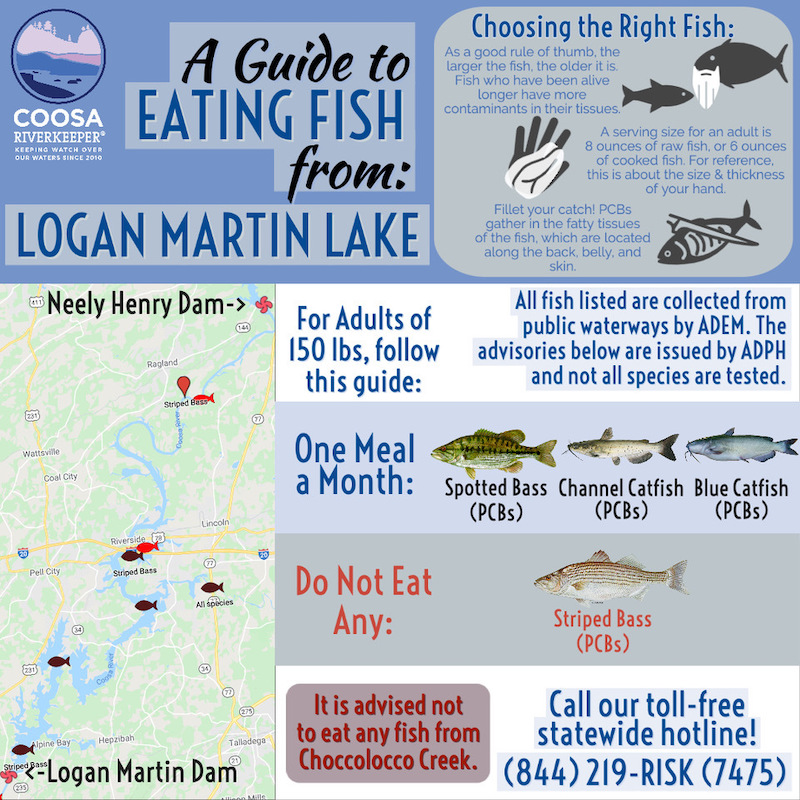 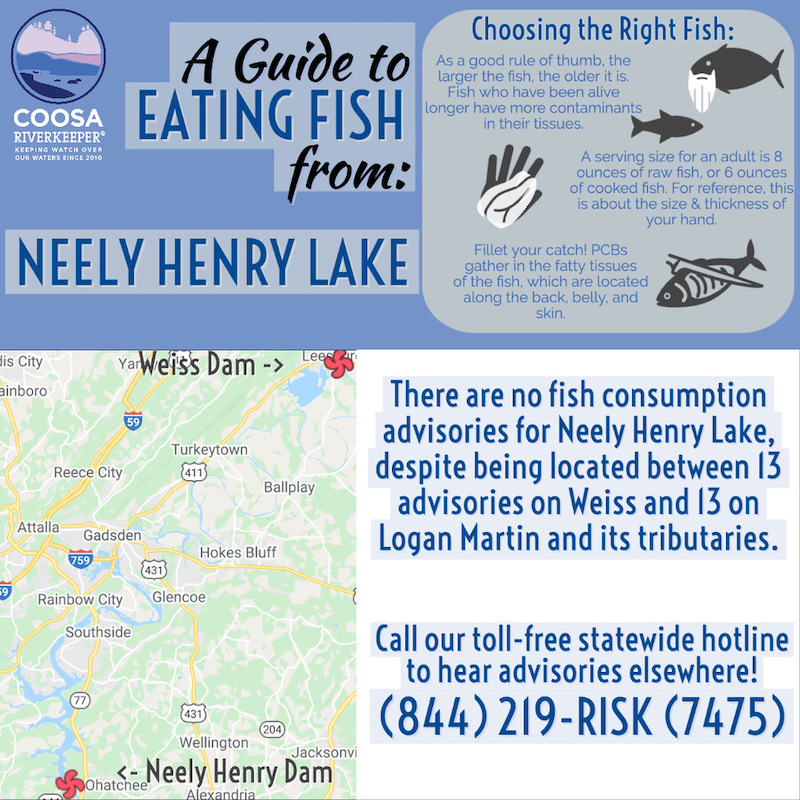 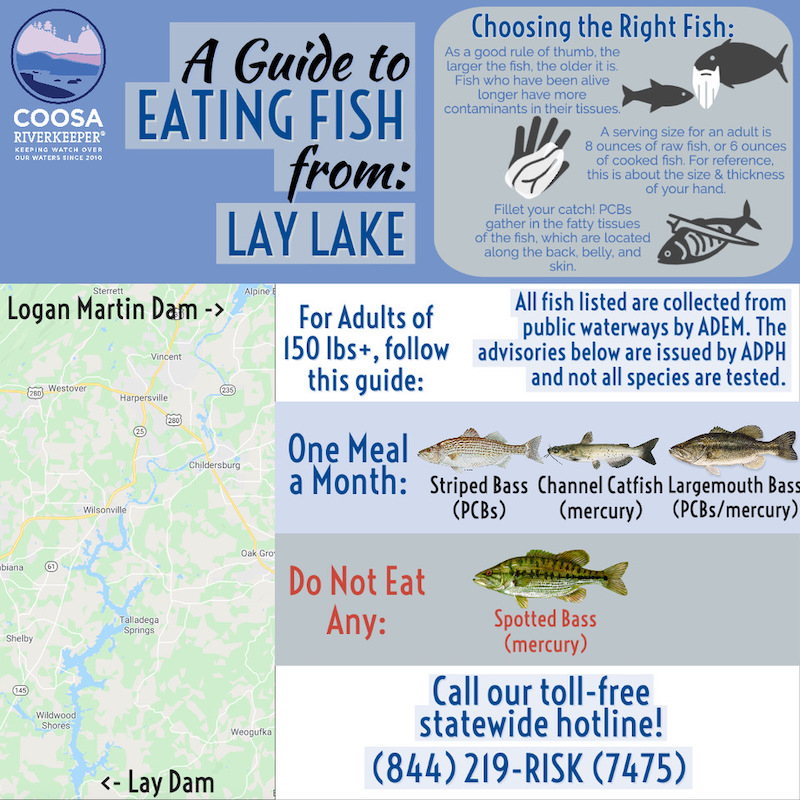 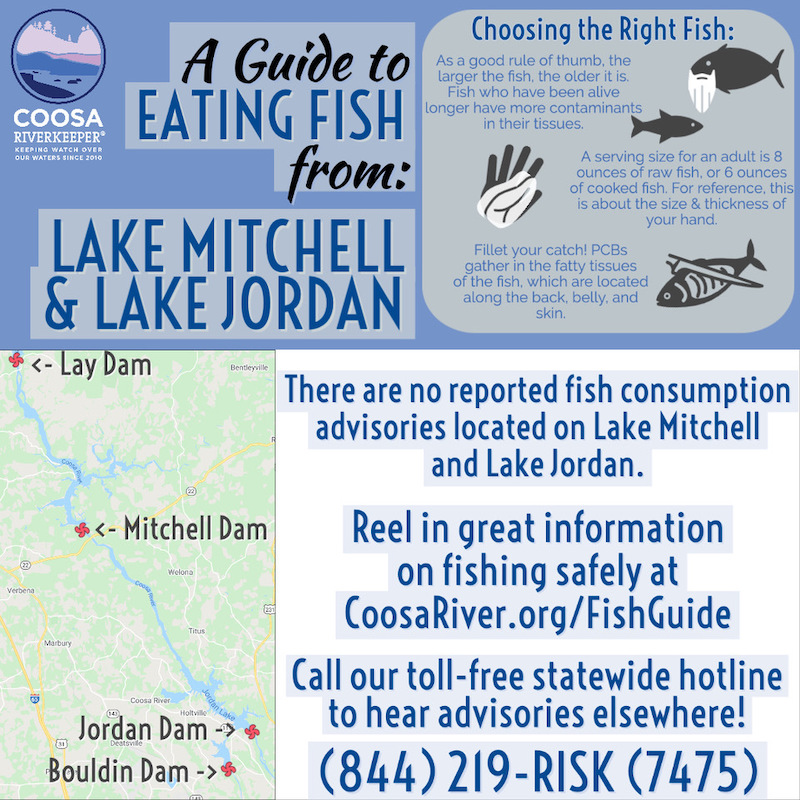 Brief Explanation of How Consumption Advisories are Issued

After catching and testing fish they can find in certain water bodies, the state issues advisories to warn anglers NOT to consume, or limit consumption of, fish that are contaminated with dangerous pollutants like polychlorinated biphenyls (PCBs) and methylmercury. Many of the advisories warn the public not to eat any fish from the specific waterbody, while others recommend limiting exposure to one or two meals per month.

What We Have to Say About It…

“The Coosa River is known to many for its fantastic fishing, but there is significant legacy pollution beneath the surface of our river from PCBs, a known carcinogen,” says Justinn Overton, Coosa Riverkeeper’s Executive Director. “91% of fishers we surveyed said they would heed the consumption advisories if they knew what they were. We hope our work on this issue educates families to fish safely and reduce their exposure to contaminants. Fishing is an important tradition for our culture and state.”

“In Alabama, the River State, our anglers do not have a right to know where the fish are unsafe to eat,” Victoria Miller, Coosa Riverkeeper’s Fish Guide coordinator, said. “Even though multiple state agencies are involved in the testing and analysis process, many Alabamians are left to find this information on their own because there is no legislation on this issue. Fortunately, non-profit organizations like ours are helping families reel in this important public health information across Alabama.” 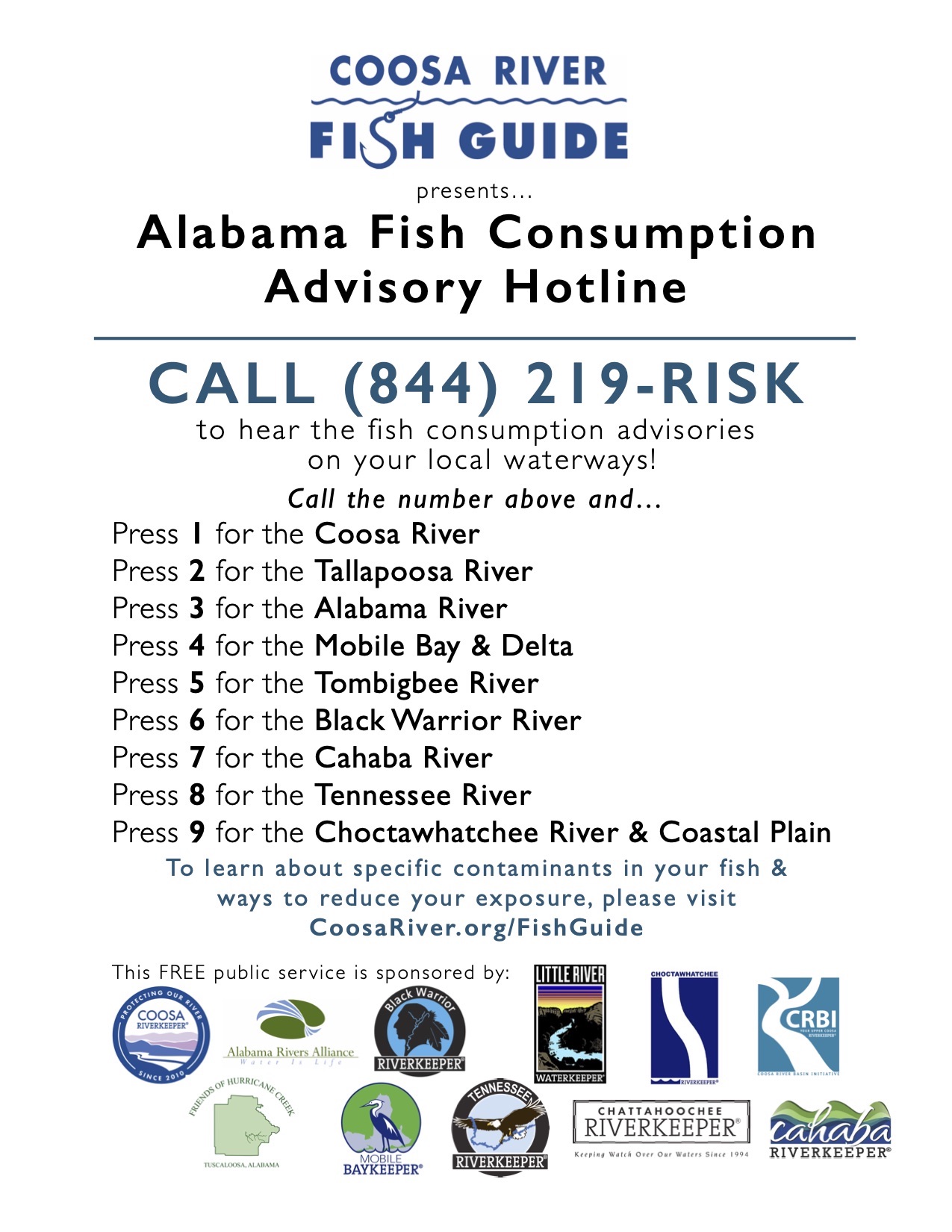 Fish Guide was developed over several years as a response to surveys conducted with more than 250 anglers along the Coosa River. The purpose of Fish Guide is to educate fishermen throughout the state of the fish consumption advisories at their favorite fishing holes. In addition to providing them with information about the fish consumption advisories each year, the program also features a toll-free hotline for anglers to immediately hear the advisories throughout Alabama. That hotline has now been updated with the 2020 advisories.

Reel in all kinds of good fishing information here