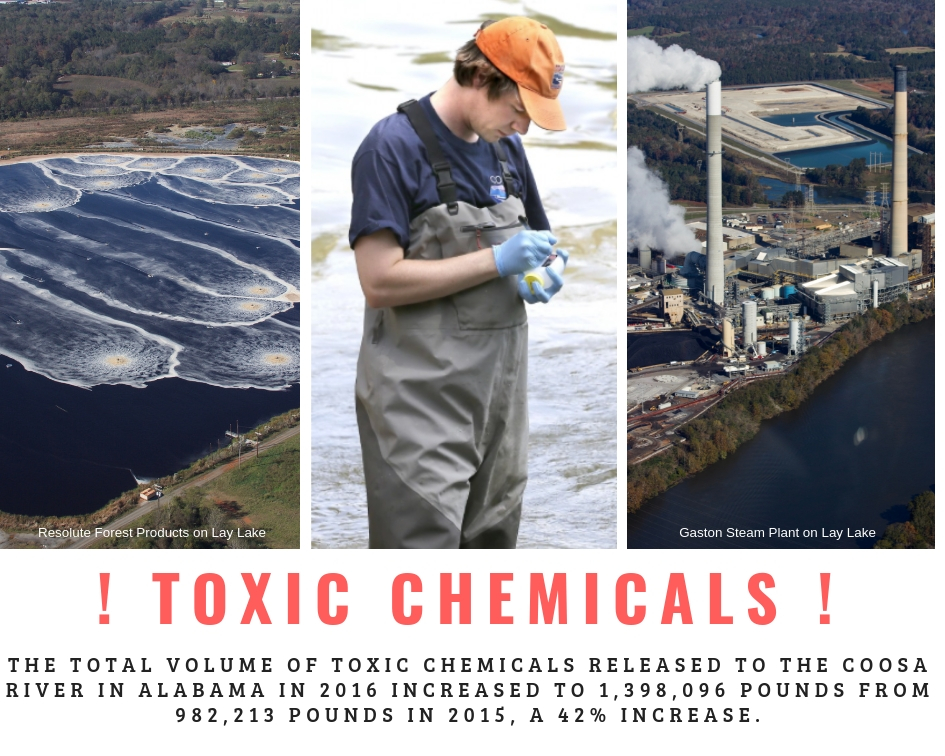 Every day toxic chemicals are discharged into the Coosa River from factories and power plants that are permitted to do so by the Alabama Department of Environmental Management.

Some of these chemicals are especially toxic, being known or suspected to cause cancer, developmental or reproductive issues. In turn, many people in Etowah, St Clair, Talladega, Shelby and Chilton Counties get their drinking water from the Coosa River or fish/swim in her lakes. Coosa Riverkeeper, in our role as a government and industry watchdog, monitors the type and volume of toxic chemicals being release to our river.

Under federal law, companies must self-report how many pounds of each toxic chemical they released to the air, water and land. That data is available to the public via the Toxics Release Inventory database. Each year, Coosa Riverkeeper downloads and analyzes the data, publishing a list of all companies in the Coosa Valley that discharge toxic chemicals to the river. This week, we publish the analysis for chemicals released in 2016, the year with the most recently available data. In 2016, the year of the most recently available data, that meant nearly 1.4 million pounds of toxic chemicals from 32 facilities.

This year, #1 Koch Foods of Gadsden and #2 JCG Foods of Collinsville again topped the list, each discharging massive amounts of nitrates to the Neely Henry watershed. They are followed by #3 Resolute Forest Products, a paper mill near Childersburg on Lay Lake, and #4 Gaston Steam Plant, an Alabama Power steam plant on Lay Lake that burns coal and natural gas.
TOTAL TOXIC DISCHARGES:
CANCER-CAUSING CHEMICALS:

*All data is self-reported by industry to the EPA’s Toxics Release Inventory. From there, it is accessed by Coosa Riverkeeper, Inc. and analyzed to generate these rankings. Errors and omissions are possible.*